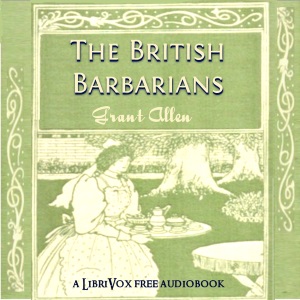 LibriVox recording of The British Barbarians, by Grant Allen. Read by Ruth Golding.

After Civil Servant Philip Christy crosses paths with the mysterious Bertram Ingledew in the respectable suburb of Brackenhurst, Philip and his sister Frida, married to the wealthy Scot Robert Monteith, become friends with the stranger. Bertram has some unconventional concepts about society, and as the story unfolds, his beliefs and actions cause much disruption in the family and the neighbourhood.

Who is Bertram? Where does he come from? Allen explores some interesting ideas about society, some of which are curiously relevant today.

The story is preceded by an introduction which, although it may appear to have no connection with the story itself, the reader is earnestly besought by the author to read. The introduction begins as a diatribe against publishers, and develops into a philosophical justification of Allen's writing, and may, if desired, be omitted by the listener who is only interested in the story. (Summary by Ruth Golding)

Reviewer: TwinkieToes - favoritefavorite - October 12, 2017
Subject: Agree with ListeninginChicago
I started with the story, planning on listening to the introduction afterward.

Amusing at first, but eventually I got tired of the digs at social norms that the author doesn't like, ones that aren't as horrible as the author paints them. The author falls into the regular trap of discounting and making fun of anything not "rational," "reasonable," or that can be proven with the senses. The author regularly slams religion, etc. (when there is rational and reasonable and even objective evidence as to the validity of Christianity).

The main character comes into England, ostensibly to study the culture (the "taboos and fetishes") - the social prohibitions and customs that made England what it was to him: the most advanced of barbarian people. But he seems to be unable to stop himself from trying to change the behaviours and thinking of those around him, when a true scientist or anthropologist wouldn't do that, but would respect the culture one is studying. Or else I'm too much of a Star Trek fan and a fan of its "prime directive". ;)

Thinking it's right and almost a DUTY to tear apart a family simply because one spouse doesn't "love" the other (what is love, anyway? Feelings come and go) - and using out of context Scripture references to justify it - doesn't seem like part of any advanced civilization to me. It seems more the misguided agenda of the author.

Given the rotten philosophy underlying the story, I skipped the introduction.

Ruth's reading is flawless. That's the only reason I'm giving the story as much as 2 stars.

Reviewer: RofVT - favoritefavoritefavoritefavoritefavorite - September 22, 2017
Subject: Thank-you!
I found this very enjoyable. I highly recommend that all those who do listen do not skip the author’s introduction. It may not be directly related in a literary sense to the story’s narrative, yet it so in a philosophical sense. Moreover it is quite interesting, as is the book in its entirety.
Reviewer: ListeninginChicago - favoritefavoritefavorite - August 13, 2010
Subject: Excellent reading
Another excellent reading by Ruth Golding, but my rating is only 3* because I could take or leave the story itself. Allen raises an interesting contrast by pointing out how we criticize other societies for their "primitive" taboos, while at the same time accepting our own taboos unquestioningly. While I would agree that we should be thoughtful and understand the basis for our customs and societal norms, I don't agree with the agnosticism and humanism that underlie Allen's arguments. Given that I approach life from a thoughtful monotheistic world view, I found Allen's practice of throwing all religions into the trash bin of irrationality to be very dull by the half way mark. Unfortunately, there was nothing much in the story itself to keep me engaged.

Uploaded by librivoxbooks on December 31, 2009